Announcing the Retirement of a Valued Kenco Employee - Peggy Breeden 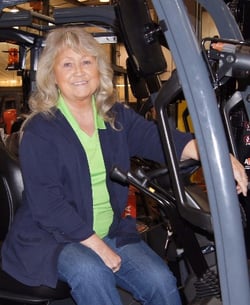 After 40 years of working at Kenco, Peggy Breeden has announced her retirement. Peggy serves as the Rental Operations Business & Development Manager for Kenco Toyota Lift, the forklift dealership arm of Kenco Material Handling Services. She will retire at the end of March.

Peggy sat down with us to share her story of how she got started and how her career has evolved over the years.

In the late 1970s, Peggy’s connection with Kenco was as the spouse of an employee. Her husband Jerry worked as a mechanic in the forklift dealership, while she stayed at home to take care of their two small young boys.

During the summer of 1978, Jerry mentioned a two-week inventory assignment was available to count and record thousands of forklift parts. Peggy decided to take on this temporary job to earn a bit of extra money. Little did she know this temporary assignment would stretch into a long, successful career.

Inventory counting was a manual process with each part name and quantity hand-written on a 5 X 7 index card. When the project was complete, Peggy was offered and accepted a full-time job in the parts department. Shortly after, she was asked to transition to the service area, where she answered calls from customers, dispatch mechanics, and handled billing needs. She was a multi-tasker before multi-tasking was a thing.

A Commitment to Grow

In the beginning, Peggy knew very little about forklift equipment, but she learned a great deal from her General Manager, Bill Curtis. Peggy poured over forklift manuals and learned everything she could about the nine pieces of equipment in their small rental fleet. She even committed each truck’s serial number to memory, a habit she would continue until the fleet grew to over 500 units! These early days of learning from Bill and being in the forklift division are some of her fondest memories at Kenco.

In the early 1980s, Sam Smartt Jr., son of company co-founder Sam Smartt Sr., became the GM for the Chattanooga dealership. Envisioning a more robust rental operation, he asked Peggy to oversee the expansion of the rental fleet. She knew she needed to understand the needs of the local market, so she grabbed a phone book (no Internet back then) and began calling businesses using the Yellow Pages asking businesses about their operations and how Kenco could help. Armed with this market research, the branch soon began acquiring Toyota-brand lift trucks. Today, the fleet has grown to more than 900 pieces of equipment!

Peggy’s instinctual understanding of customer needs and providing exceptional service have been hallmarks of her long career. Those who work with her tease her that she’ll rental most anything for one of her customers to secure a new business partnership.

For example, a few years ago, Peggy was working hard to win additional business with Books-A-Million, promising to be a one-stop shop for their equipment rental needs across the country. This was put to the test when she received a call from the retailer’s Knoxville start-up that was so new there wasn’t heat in the building and asked if she could provide same-day rentals of space heaters and extension cords. Although this was outside the scope of KTL’s offerings, Peggy knew meeting this need would go a long way in building trust. She purchased the heaters and cords from a hardware store, loaded them in her car, and drove up I-75 to meet a Knoxville-bound delivery truck she’d procured at the last minute. Her intuition was right, and the heater rental led to a profitable lift-truck leasing agreement.

Her natural ability to connect with others extends beyond customer relationships to the back-office as well. Today she manages a team of six rental coordinators who have become dear friends. She has always appreciated the camaraderie and family-like atmosphere Kenco has provided, not to mention the opportunity to work with her own family members for much of her time here.

Her husband Jerry retired in 2014, and their two sons were also employed with the company for several years. Peggy treasures the extra time they’ve spent as a result of working with Kenco, and although she’s excited about joining her husband in retirement, she will miss the family-like relationships she’s developed over the years with the Kenco Toyota Lift staff in all four southeast branches and in other Kenco locations as well.

The Breeden family has more than 100 years of combined service with Kenco.

Sam Smartt, Jr., Jeff Burns, President of KMHS, and Evann Gibson, Vice President of KMHS say a big “Thank You and Best Wishes” to Peggy on behalf of the KMHS team as she enters a new phase of life, with more time to enjoy family and hobbies.

Previous Article
How a Vehicle Management System (VMS) Can Help Your Operation | Kenco
Next Article
LP or Electric? What You Should Know to Decide Between Forklift Types